Back in June 2022, President Joe Biden urged Congress and state leaders to temporarily suspend the gas tax as prices rose. However, experts and critics warned of the possible disadvantages.

According to a March 2022 poll conducted by Politico/Morning Consult, 72% of Americans were in support of a temporary relief of state fuel tax. Some states already passed bills and enacted their own gas tax holidays despite the possible drawbacks. Were consumers able to save though?

What critics had to say about cutting gas taxes

Critics have stated the gas tax holiday doesn’t address the real issue: the supply of crude oil and shortage of its refining capacity. Both have been stated to be factors in the high gas prices. To lower the prices or gas would only boost demand.

They also argued that cutting gas taxes for a temporary time may stall the transition to eco-friendly energy. Thus encouraging motorists to ignore the need of sustainable resources.

Others have pointed out oil producers and gas stations would prevent any savings by raising the base price of gas. According to The Transportation Investment Advocacy Center, their analysis stated that over the past decade, less than 20% of gas tax cut passed down to the consumers. 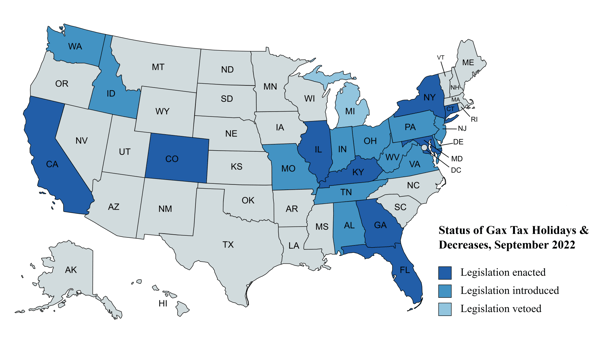 How much do gas tax holidays actually save?

President Biden said it would bring relief to families who were traveling during the summer when he proposed the three-month gas tax holiday. Cutting the federal fuel tax would have only dropped the price per gallon by 18 cents.

While it was never passed, some states did enact their own gas tax holiday.

It’s been nearly three months since President Biden brought up a federal gas tax holiday. While gas prices have been steadily declining over the past eighty days, hurricane season is just around the corner.

Even though there were no storms in August, the National Oceanic and Atmospheric Administration predicted the season to be above average with three to six major hurricanes coming from the Atlantic. We could possibly see a spike in gas prices if any major storms hit the Gulf Coast and cut off the supply of crude oil. This could reignite the conversation around gas tax holidays.

In an interview with the Northern Kentucky Tribune, Lori Weaver Hawkins of AAA Bluegress said, “It is hard to predict whether we’ll see continued smooth sailing or disruptions due to tropical storms.”