Carriers have a tough job seeing freight makes it to destination without incident. Getting loaded at the shipper is one stop along the way that should be seamless. So what happens when a driver knows they have been overloaded by the shipper and there's an attempt to get the driver on the road anyway?

That is called coercion. In 2016, the FMCSA made it illegal for shippers, and other entities, to coerce truck drivers. The congressional move came after a listening session between carriers and shippers in a shift for more regulations on the demand-side of the supply chain.

The Federal Motor Carrier Safety Administration says, "Coercion occurs when a motor carrier, shipper, receiver, or transportation intermediary threatens to withhold work from, take employment actions against, or punish a driver for refusing to operate in violation of certain provisions of the FMCSA."

This is the beginning of difficult and costly decisions that drivers have had to make for decades. Starting with paying for scale tickets and ending with driving back roads, lost miles, uneditable drive time or DOT fines.

Drivers have to communicate to shippers what regulations they might be violating if they follow through with the shipper's demands.

Instances of shippers asking a driver to violate their Hours of Service, or pressure drivers to ignore safety regulations (like leaving their site to get a certified scale ticket when overloaded) or else face the consequences of lost compensation and future jobs, has been documented for decades.

Documentation is the key as collecting any evidence of coercion and lies primarily with the driver. In the event a truck has been overloaded, the driver must prove they have tried everything they can to reconcile the overloading incident. 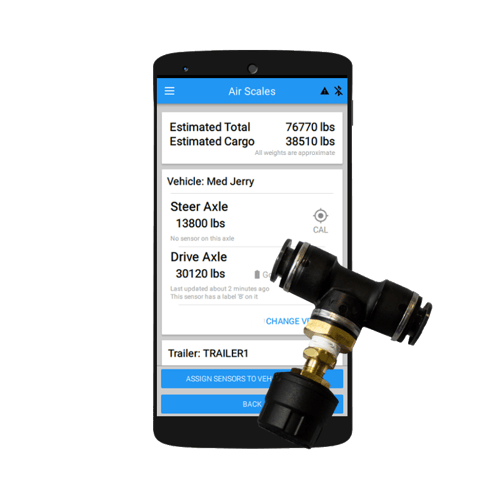 Using cloud-based software to keep copies of documents uploaded and organized is now at your fingertips. The Blue Ink Tech app can provide accurate calibrated weight readings and allows for easy scanning, uploading, and safe storage of Bills of Lading, emails, screenshots of texts and other communications to gather and store the evidence for filing a complaint with the FMCSA while you are still on the site.

Being sensible with the shipper and asking them to take some of the divisible commodity off of the truck is the first step once a driver knows he or she is overloaded.

Shippers don't usually trust typical pressure gauges on trucks and trailers because there is no proof of calibration. All trucks and trailer gauges read different weights at different pressures and taking a drivers word for it will not work. There needs to be proof of calibration with multiple scale entries from multiple loads to build confidence that the weight reading is accurate.

Because a shipper needs to keep trucks moving, asking the driver to leave the yard to go get a certified weight ticket, is coercion. The driver should ask the shipper to put the request in writing (email, text or letterhead) or provide the policy that suggest drivers leave the site potentially illegally to get a scale reading. One of the questions a driver might ask a shipper is, "Can I get it in writing that if I am certified overloaded I can come back in and the extra weight will be taken off?"

Carriers and truck drivers have 90 days to file a complaint of coercion with the FMCSA. There are two ways action can be taken: in writing and mailed to the FMCSA Division Office in the state were the entity making the complaint is employed, or with the National Consumer Complaint Database. Choose the "Trucking Company" category then click next. You will follow several steps to see that the complaint is properly filed.

Complainants also have the option to file a whistleblower complaint with the Occupational Safety and Health Administration (OSHA).

Penalties for shippers who coerce truck drivers can be anywhere from $10,000 to $16,000 in fines. These civil penalties are enforced after the government has met it's burden of proof, which is why drivers must keep details and documentation in order.